We are delighted to present a collection of original short animations on the theme of isolation and loneliness from first-year 3D Animation students at Edinburgh College.
The students have been inspired by Vintage Vibes and its fresh new approach to spreading friendship and good company among the city’s over-60s.

On Thursday 2nd June the animations were screened at the Festival Theatre, Edinburgh and the first, second and third prizes were awarded to:

The winning animation ‘Bubbled’, by Angela Laskovics, captured the judges’ attention with its imaginative portrayal of loneliness, slowly trapping its victims inside its bubble. At the resolution, the animation shows a Vintage Vibes volunteer popping the ‘bubble’ of loneliness and bringing the main character back into the world and helping them to create new friendships.

Second prize was awarded to The Castaway by Eilidh Norris, visualising isolation as an island, and third to Lonely by Tenzin Chime Soktsang, bringing to light the sensation of loneliness engulfing you. 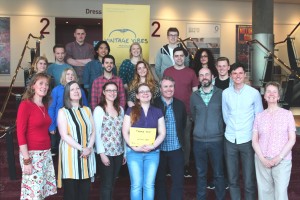 “We were delighted with the response from these talented first year students from Edinburgh College. They depicted the important subject of social isolation with sensitivity and beauty. The winner was a firm favourite and we can’t wait to use these animations to help spread the message of the fantastic work done by Vintage Vibes and our volunteers.” Su Millar, LifeCare

We will be running volunteer recruitment drives across the city from July onwards, and can’t wait to use these animations to inspired the people of Edinburgh to get involved!