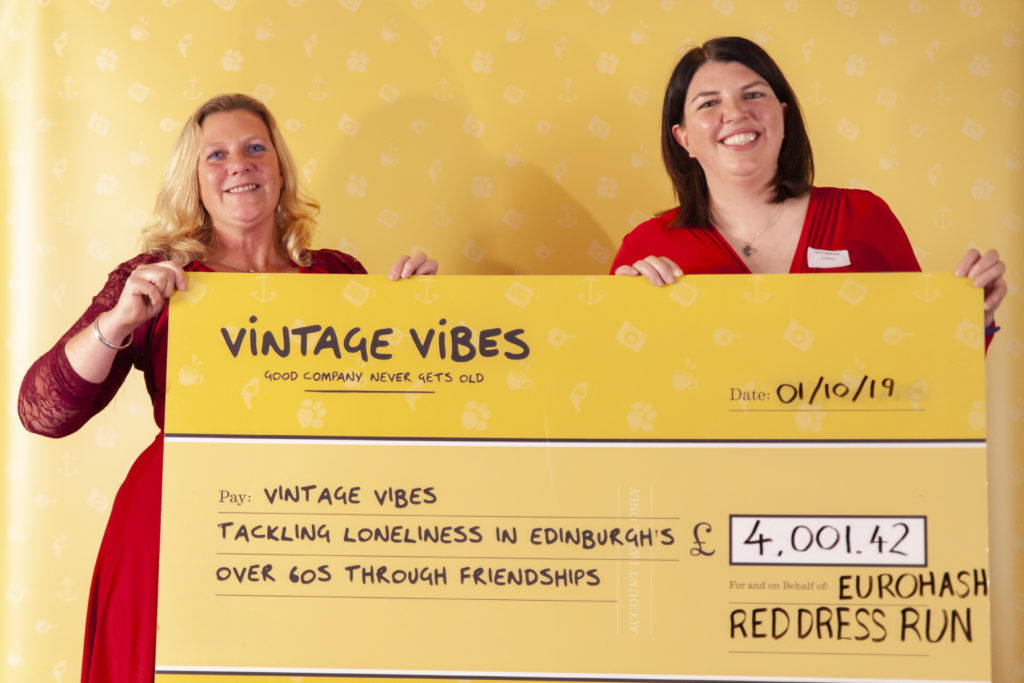 Both Abi and Katherine very kindly gave me insight into the Hash House Harriers (running club) and their Red Dress Run 2019. Their run raised an incredible £4001.42 to help Vintage Vibes tackle isolation in local older people.

WHAT AN AMAZING HISTORY

Due to its incredible history, here’s a brief overview of the origins of the Hash House Harriers and the Red Dress Run…

The Hash House Harriers, or more eloquently the “Drinking club with a running problem”, formed when Colonial soldiers and Expatriates in the 19th century invented a genius way to promote physical fitness with a way to satisfy the thirst for beer and a method to cure weekend indulgence. 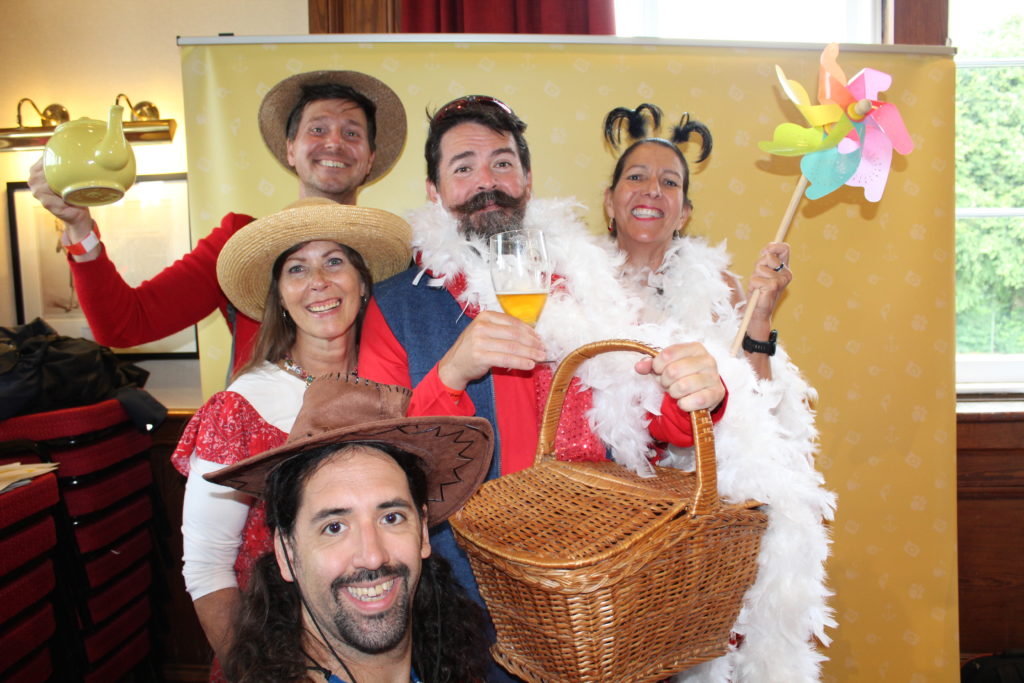 BUT WHY THE ‘RED DRESS RUN’?

With the already established popularity of the Hash House Harriers across the globe, on a seemingly unsuspecting day in August 1987, a young lady wearing a red dress emerged from an airplane in southern California.

It was intended to be a casual catch-up with a high school friend. She found herself transported to Long Beach, where her friend (a member) introduced her to the zany club.

One member commented that her attire (red dress and heels) wouldn’t be appropriate for a fun run. So they urged that she “just wait in the truck” until her friend returned.

Wishing to prove them wrong, she rose to the challenge and straight into history by sporting her red dress and heels. As a result, this armed her the nickname “Lady in Red” which has now become the iconic symbol.

Today, the Red Dress Run has become a worldwide phenomenon. Men and Women running around in their thousands across the globe, swarms of runners creating this sea of red washing through various international countries all for fun and an incredible cause.

It’s inspirational to think about. 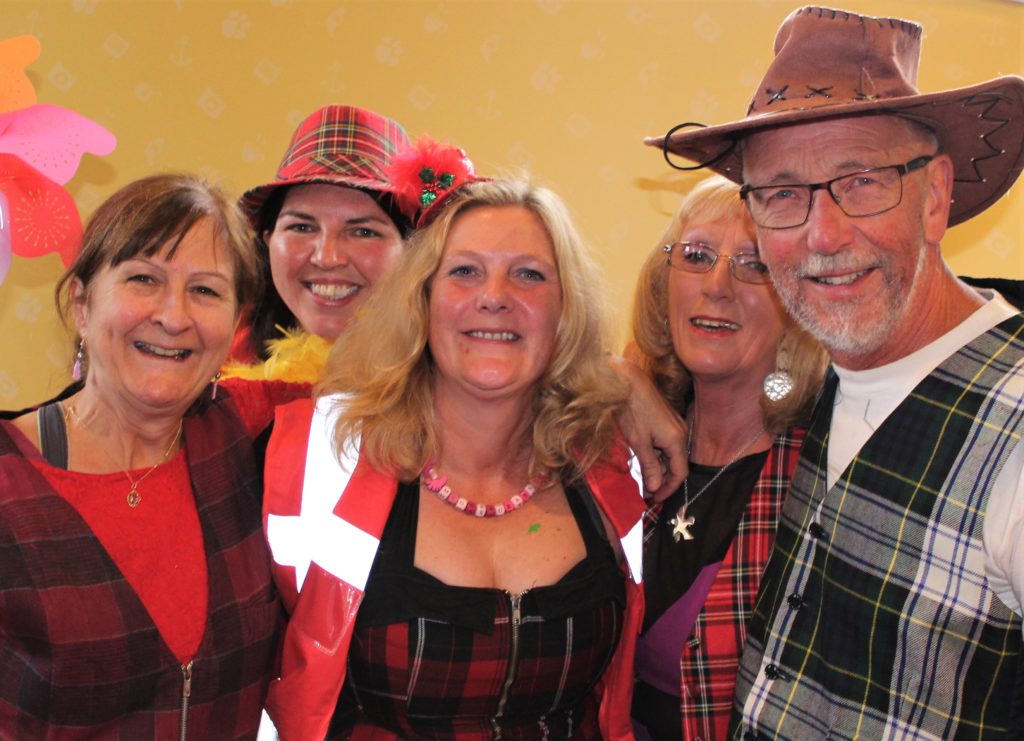 The main goal of this outstanding event is to raise money for local charities.

So I spoke to Abi and Katherine about their experiences, why they chose to raise money for Vintage Vibes and their part in the Red Dress Run that took place this August in Edinburgh.

Katherine said: “We were organising a big event from the Hash House Harriers, which happens every 2 years, called Euro Hash.

We usually start off any big events with a charity red dress run to raise money for a local charity. I volunteer for Vintage Vibes, so I suggested we raise money for them.” 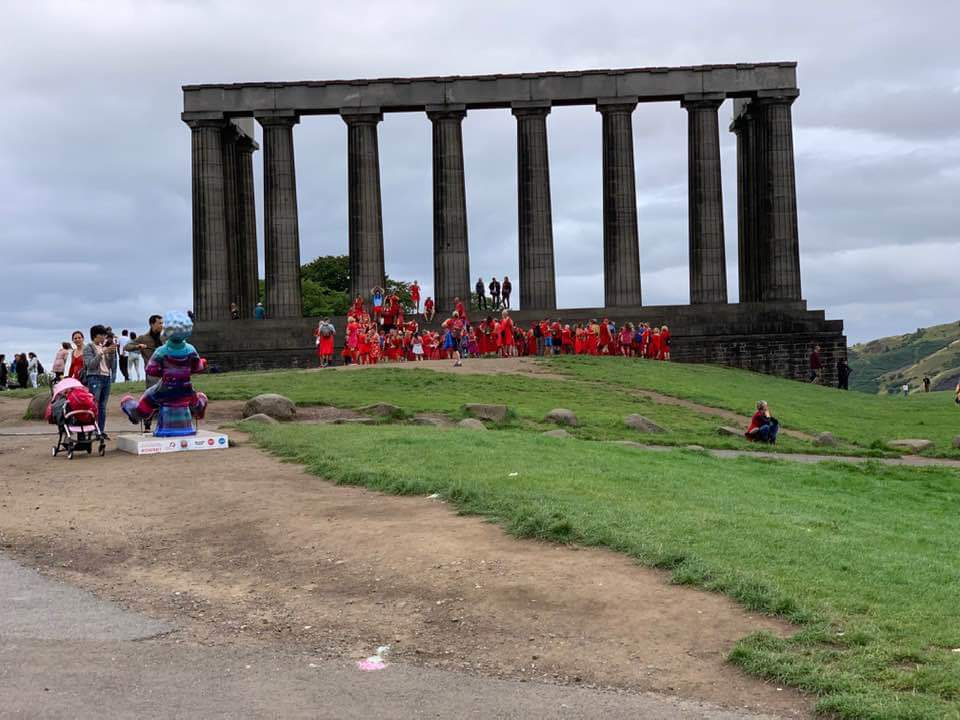 Abi gave some more details regarding the Red Dress Run and the wide variety of participants this year.

“The event called Eurohash, which normally involves only European clubs and runners, attracted a lot of Americans, Australians and New Zealanders, on this occasion.

“The Americans hijacked one of the collection buckets from their run-group and started selling hugs for donations. People in the street were excited at being able to hug all these people wearing red dresses.”

The popularity of the Red Dress Run and how so many people decided to run for the cause gives an insight into the sheer commitment and sense of pride the runners have.

Abi explains: “We are a very social fun running club. When we descend on new a location, we always give something back to the community.”

It’s not just the commitment of the runners involved but the organisers too. When asked about the organisation of the event, Abi explained: “There’s a lot of work that goes into it, we had a lot of helpers to make it happen. 32 members of the organising team.” 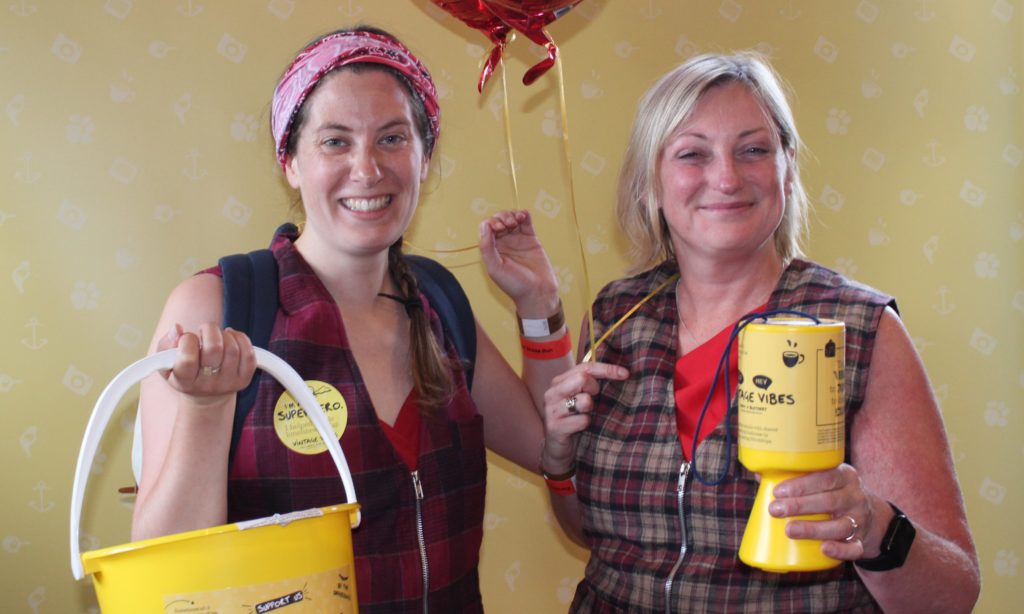 EVERY AGE AND EVERY COUNTRY

When looking at the incredible photos, you can clearly see how one cause has brought so many people together. Plus how much support for each other the Red Dress Run instils.

“It is very social. We have all age groups. On the weekends we have children, and during the week people in their 30’s, over-60s and even some in their 80’s.

“There’s no discrimination. When we told the younger crowds we were supporting Vintage Vibes their response was ‘isn’t that what we do anyway, support everyone’. We have our own VIPs here.” Abi concludes. 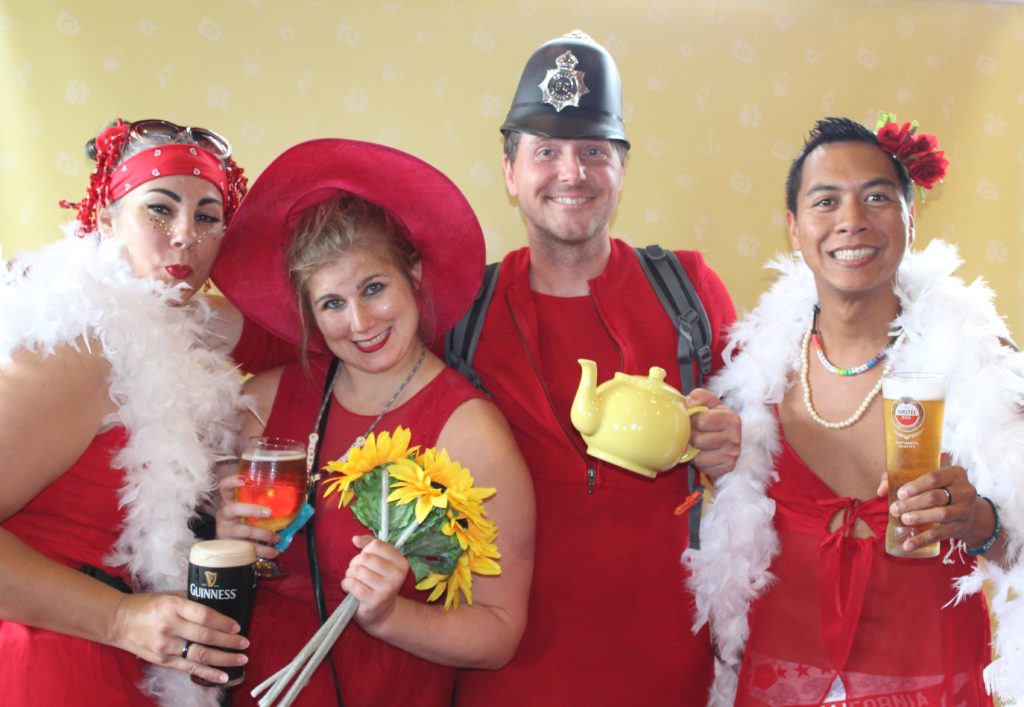 The power of the Red Dress Run has also included changing the laws. In Tasmania it was illegal for men to wear dresses.

Due to the influx of Red Dress Run supporters, and the amount of tourism it generates, the law was changed to allow men to run in red dresses.

Moreover, when discussing the extent of the power and influence as a collective this cause has, Katherine said: “Charity-wise I think it’s phenomenal. One of the biggest things is the impact we create for charities around the world.”

When asked if being involved in this event has changed their perspectives, Abi said “I’m looking forward to getting older because I have a big hash family. I know I’ll have loads of trips to look forward to and social events.

“It just goes to show how important it is to have company and not get too isolated. Vintage Vibes is great for making sure people still have contact and can meet with different people from all walks of life. I think it does make a big difference to people lives.” 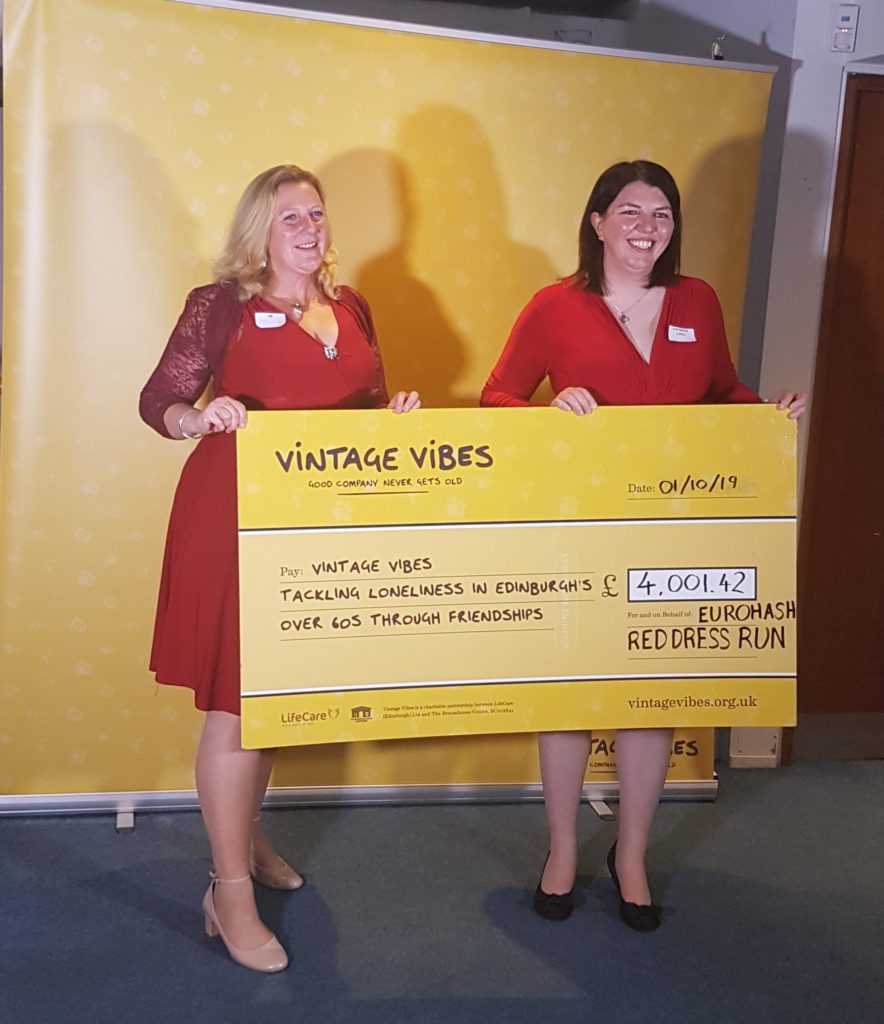 Here at Vintage Vibes, we would like to wish a warm heartfelt thank you to Abi, Katherine and the Hash House Harriers. Because you all did a fantastic job supporting our cause and raising an outstanding £4001.42 to tackle loneliness and isolation in Edinburgh. We would also like to thank Royal London for their kind contribution of £300.