Tackling the problem in Scotland

Have you ever made an appointment at your GP simply because you needed someone to talk to? If so, you’re not alone – research carried out by a group of MSPs in Scotland last year found that the issues of social isolation and loneliness were deeply felt across all aspects of our society. They heard from people in big cities and in rural areas who all had one thing in common – loneliness. 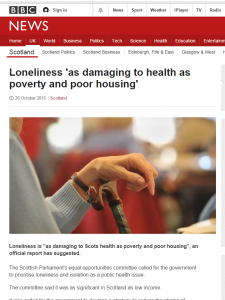 The good news is that action is being taken. The Scottish Parliament’s Equal Opportunities Committee has called on the government to prioritise loneliness and isolation alongside poverty and poor housing. You can learn more here in the report they published in 2015.